"I've passed up good men because there were no 'sparks'. When I chased the 'sparks', things didn't go too well. WHAT IS WRONG WITH MEEEEEEE?! ?" 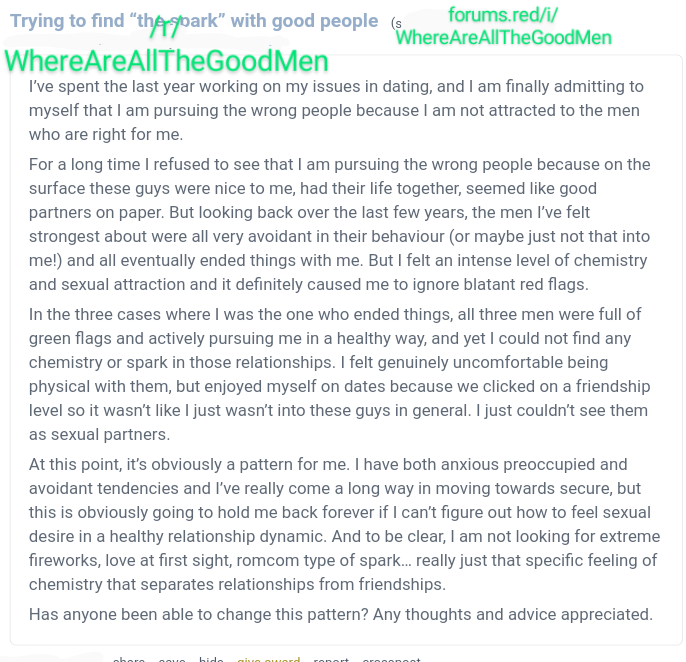 Even a hoe can't make a hoe a housewife.

I urge you once again, if you're visiting from my x-post to reddit, take a few minutes to explore forums.red and trp.red. Maybe even create an account.

Finally did that. Since you asked so nicely. This might take me some getting used to though, but i'll manage.

It's actually easy once you get used to it.

How come they never mention looks? If it’s not because of a lack of looks, then they’re mad because the men they’ve created with social conventions aren’t ballsy enough to be the men they really want.

If they didn’t create social conventions then there’d be more guys with alpha/beta combination and not just one or the other.

The whole situation is especially hilarious because that's actually what they really want, and they've just about killed it off!

It's a vicious cycle that feeds itself with feminist lies perpetually. Now it's to the point where only 0.6% of men meet modern women's standards(according to Tinder data). A larger and larger pool of women chasing a smaller and smaller pool of men.

By the time they figure this out, your average Western guy will have figured out that he's a catch elsewhere and will be permanently off the market when these hoes decide to "settle" for them. We're in for decades of these posts increasing exponentially.

Yeah exactly, I should’ve clarified but when I say “really want ballsy guys” I mean that that’s what they want to get attracted but yeah those “green flags” of betas aren’t good enough on their own.

Liar. You ARE looking for fireworks, the romcom, all of that. I got news for you, lady. Tingles aint everything. If you're waiting for tingles, you'll be waiting a long lonely time.

You need to find someone who likes you for you. You need to develop attributes that make you likeable. Stop screwing so soon and let some tension actually build up. You're uncomfortable bc you're an uncomfortable amd neurotic person. Probably on meds.

Tingles typically don't last. After a certain point, life gets real and its not all fun and games in the relationshit. It's more important to care for each other genuinely than it is to only feel a sexual spark. That would make them a fuck buddy, not a mate.

They only advice I have is for men to run away fast from her.

Will seek tingles and cheat. May even try to pin/ paternity fraud Chad's child on a good men.

Her last question, "Has anyone been able to change this pattern?"

The answer is yes, we changed it by arranging marriages so women wouldn't do what they currently do in their dating. Now that arranged marriage is out the window, we are reaping the logical conclusions of that societal decision. Only winners are guys in the top 20% who have women self-sorting themselves into modern day tinder harems.

I have to step in and call bullshit. The world's oldest literature spends a good portion of the time warning Chad's that all the married babes chasing them are going to net them a death sentence or a lifetime of slavery. Stick to the prostitutes until you can afford a girl, boys. When every 15 year old was married off to 30-50-year olds with resources, those chicks were desperate for all the 25-year old studs sitting around. Woman were always wired like this. Peek into 3000 years ago and the wisdom of Solomon:

For the lips of a forbidden woman drip honey, and her speech is smoother than oil, but in the end she is bitter as wormwood, sharp as a two-edged sword. Her feet go down to death; her steps follow the path to Sheol... Keep your way far from her, and do not go near the door of her house, lest you give your honor to others and your years to the merciless, lest strangers take their fill of your strength, and your labors go to the house of a foreigner, and at the end of your life you groan, when your flesh and body are consumed, and you say, “How I hated discipline, and my heart despised reproof! ...Why should you be intoxicated, my son, with a forbidden woman and embrace the bosom of an adulteress? ...The iniquities of the wicked ensnare him, and he is held fast in the cords of his sin. He dies for lack of discipline, and because of his great folly he is led astray. ...Do not desire her beauty in your heart, and do not let her capture you with her eyelashes; for the price of a prostitute is only a loaf of bread, but a married woman hunts down a precious life.

Can a man carry fire next to his chest and his clothes not be burned? Or can one walk on hot coals and his feet not be scorched? So is he who goes in to his neighbor's wife; none who touches her will go unpunished.

...He who commits adultery lacks sense; he who does it destroys himself. He will get wounds and dishonor, and his disgrace will not be wiped away. For jealousy makes a man furious, and he will not spare when he takes revenge. He will accept no compensation; he will refuse though you multiply gifts.

...For at the window of my house I have looked out through my lattice, and I have seen among the simple, I have perceived among the youths, a young man lacking sense, passing along the street near her corner, taking the road to her house in the twilight, in the evening, at the time of night and darkness. And behold, the woman meets him, dressed as a prostitute, wily of heart. She is loud and wayward; her feet do not stay at home; now in the street, now in the market, and at every corner she lies in wait. She seizes him and kisses him, and with bold face she says to him, “I had to offer sacrifices, and today I have paid my vows; so now I have come out to meet you, to seek you eagerly, and I have found you. I have spread my couch with coverings, colored linens from Egyptian linen; I have perfumed my bed with myrrh, aloes, and cinnamon. Come, let us take our fill of love till morning; let us delight ourselves with love. For my husband is not at home; he has gone on a long journey; he took a bag of money with him; at full moon he will come home.” With much seductive speech she persuades him; with her smooth talk she compels him. All at once he follows her, as an ox goes to the slaughter, or as a stag is caught fast till an arrow pierces its liver; as a bird rushes into a snare; he does not know that it will cost him his life.

I'd hardly call those top 20% winners in this case. Juice ain't worth the squeeze with the modern woman. An alpha can't give this particular woman all that she wants, neither can a Beta. Noone really can, because she will never be happy no matter what she has or what she is given, such is the state she put herself in. Let her enjoy the outcome of her ridiculous expectations.

It isn't hard juice to squeeze when you're in the top for looks. I barely put in any effort and am more than sexually satisfied, and I don't pay a single dime besides gas money to drive over. I'm not trying to give her all she wants, only what she wants for that night as long as it aligns with what I want. Sucks I know I can't start a family in the environment that western society has cultivated, but there is little I can do about that.

Dedicated to exposing all the women who complain about wanting a "good man", to show what happens when women reject decent men for jerks, promiscuity and unreasonable standards.

In response to r/niceguys, this sub is dedicated to exposing all the women who complain about wanting a "good man" after dating jerks and riding the cock carousel in the prime of their youth, and think they're deserving of commitment and financial stability when all they have left to offer is their depreciating looks, narcissistic mentality, used-up vaginas, and another man's kids.

But when she's in her 30s with depreciating looks, jerks who won't commit, the likelihood of being a single mom, and the social pressure from her married friends, she asks "Where have all the good men gone?"[1][2] Funny how back when she was chasing the bad boys he was a "NiceGuy™" unworthy of dating, but now that she's past her prime and needs a bailout she wants a man with nice guy traits.

Furthermore, dating jerks and riding the carousel before settling down with a good man is planned by many women,[1][2][3] and encouraged by feminists. They then come to the dating market with unreasonable standards while offering little to no value themselves. Such women are totally unaware that the mature, financially stable men they now need are the same decent men they rejected, except these men remember the rejection and are responding in kind to avoid unstable, unappreciative women who view them more as ATMs than romantic partners.