A 37-year-old single mom wants more kids. Most relationshits in this modren world are a "Prelude To Agony", but getting with single moms are especially so.

Posted about a month ago in $ Bailout $ - Permalink 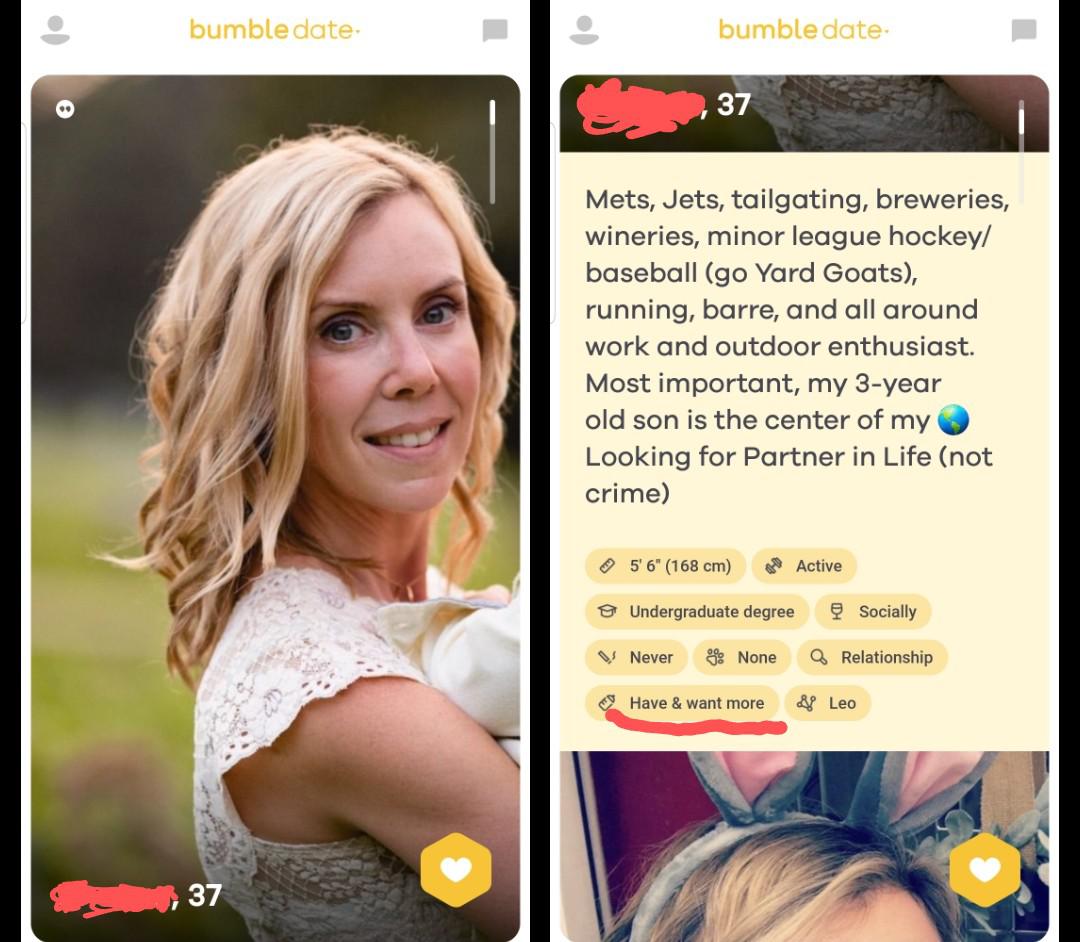 This one could be white knight bait, so do bear rules 2 & 3 in mind before commenting.

Yes, she looks alright for her age. She might not be stunningly beautiful, but she's not hideous either. She has the self-discipline to remain thin in a world of landwhales. She passes the boner test, if that's all you're looking for.

Yes, she uses her profile to actually tell you about herself rather than just list a bunch of demands.

Yes, she seems pleasant and fun. So what's she doing here, you might wonder?

It's especially important for men to be on their guard when it's someone like this. It's easy to point and laugh when the Carol is 400 pounds, has missing teeth, and 7 kids from 12 different men. Someone like our subject here looks downright wonderful by comparison. I say this all the time, but which trap is more effective: an obvious spiked pit surrounded by barbed wire and signs that say "Danger! Keep out!", or a savory-smelling meal when you're hungry that has been poisoned and has no obvious warning signs?

Single moms are almost always poison. Some might be better hidden poison, such as this one. You're paying for and raising another man's kid. That other man, most of the time, is the man she really wanted.

At least this one's willing to give the new man kids of his own, right? After all, she says "have and want more".

At 37, it's most likely too late for that. Let's say you take the normal year or so to get to know each other before deciding to wed. A) you can bet that she's not revealing her true self that entire time because she wants that bailout so badly, and B) now she's 38.

Most couples want at least a couple of years together as husband and wife before cranking out kids. Every year you wait, the possibility of a healthy child goes down, drastically.

Your situation will most likely wind up being one of the following:

1) you wait too long, and never get a child of your own, but are stuck with the one who isn't even yours.

2) you wait too long, and the kid is retarded or has some other defects because mommy's eggs are old.

3) you crank one out as fast as possible, maybe even before getting married ("I must have forgotten to take my pill, teehee!"), and she flips the switch, reveals how awful she actually is, and you're on the hook for child support with a woman you hate, for a kid you never get to see or take part in raising.

Sure, it's possible everything will turn out great, just like it's possible to win the Powerball. Thing is, I can piss away $2 per week on a Powerball ticket and not worry, because I'm not banking my entire future on winning it. Do you think banking your entire future on a woman, who is already fickle anyway and governed by mood swings, hormones, and emotions of the moment, and also already has a kid from another man, and also is already too old to reliably have more kids is a good gamble for your future? I sure don't.

goodmansaysfuckyou Mod about a month ago

She is holding an infant in that picture and her current world is 3 years old. Therefore, that picture is at least 3 years old. I would wager it is closer to 4 years old. Aside from all the other BS that is customary with a single mother, it is safe to assume that this one no longer looks halfway decent (as in the picture).

Shit, good catch! I didn't even notice the infant.

Very good catch. Reminds me of a former plate who looked great at 33, then by 38 she literally looked 48 or 50. Women at this age are definitely at last call before the wall. You have to approach women like this like a Seal team. Go in under the cover of darkness, hit the target, GTFO.

Dedicated to exposing all the women who complain about wanting a "good man", along with showing the unreasonable standards women have while offering little to no value themselves.